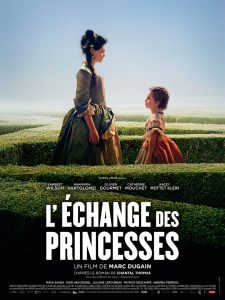 1721. An audacious idea is hatched in the mind of Philip of Orléans, Regent of France. 11-year-old Louis XV will soon ascend the throne and an exchange of princesses would serve to seal the peace with Spain, after years of war. So he marries his 12-year-old daughter, Mademoiselle de Montpensier, to the heir to the Spanish throne, and Louis XV is to marry the Spanish infanta, aged just four. But the hurried insertion into the "grown-up's court" of these young princesses, sacrificed on the altar of power games, will overcome their carefreeness.